Creativity and a love of visual arts have been a passion of Nadine’s from a very young age. In high school, she won a national award for illustration. She has designed and built furniture, created kick-ass gardens and experimented with found art, including sculptures and paintings.

It hasn’t all been about Nadine’s visual creativity; it’s also about her focus and pursuit of goals. She has obtained her pilot’s license for Ultralight Aircraft, embraced fitness, travelled the world, spent time in the great outdoors, and has stepped into the ring to learn boxing.

Nadine Buckley started her first business, a design studio in Ottawa, Ontario, with her sister Kim while still in her teens and months after graduating with a Diploma in Commercial Art from Ottawa’s Algonquin College. In those days, Algonquin was a bilingual college, and Nadine graduated from the French program – Art Commerciale.

Her parents, entrepreneurs both may have well inspired her early foray into business, but there is little doubt that her drive, ambition and legendary determination played a significant role.

Eventually, Nadine moved on to work in the family business, expanding her design portfolio to include exhibits, trade show spaces and branded environments. Ask her about co-designing and project managing the 30,000 square foot Canada House exhibit in Montreal sometime.

“Design can’t just look good.
It needs to be relevant and impactful. It needs to support your message to be effective.”

After close to a decade working in the family’s design-build business in various roles, Nadine once again started a design-focussed business that led to her co-founding McGill Buckley in 1996.

Along with her business and creative partner, Stephen McGill, Nadine has been hands-on with marketing, branding and design projects of almost every size at McGill Buckley. Through her vast talents with typography, imagery, colours and design principles, she brings projects to life, from re-branding national associations and hotels to designing websites for professional services, direct mail programs or awareness campaigns. 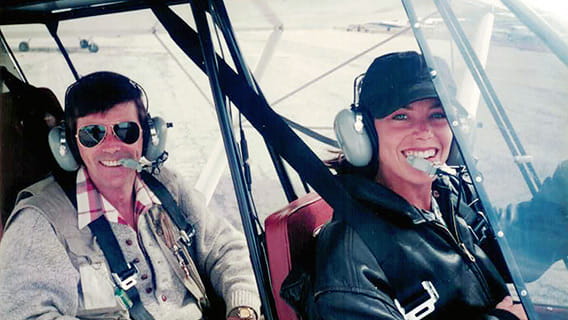 Nadine, flying an Ultralight aircraft with her dad and fellow pilot, Mike Buckley.

In her backyard garden oasis fetching a ball with surrogate dog Shiloh, aka The Cartoon Dog.

When not pondering colour palettes, fonts and other design elements, at the gym or in a boxing ring, Nadine spends her time trying not to over binge-watch Netflix, putters in her garden, relaxes in nature at the family cottage in Québec or on a beach in Costa Rica.

Lisa Brazeau brings years of strategic communications and project management experience and an uncanny ability to work from almost anywhere.